It is important to measure directly at the Mosfet Drains in order to establish whether there are dangerous spikes present in the motor controller circuit at motor start (low RPM, Low EMF high current). If not, the Snubber may be regarded as optional.

The current layout for this controller as described under sub-menu “Mechanical Layout” did not show any spike problem due to the short connections made between the Mosfet Drains and the fly-back diode anodes. The snubber has therefore been totally omitted for this layout.

However if there are dangerous spikes the snubber should be implemented as described below.

Experimental layouts for this controller had dangerous spikes as shown below. The snubber described hereunder has solved this problem satisfactorily. The next picture shows the circuit diagram for the Snubbers. There are two types of snubbers used, namely an RC snubber and a DRC snubber. The combined effect of these two snubber types is that it reduces the spike amplitudes sufficiently. 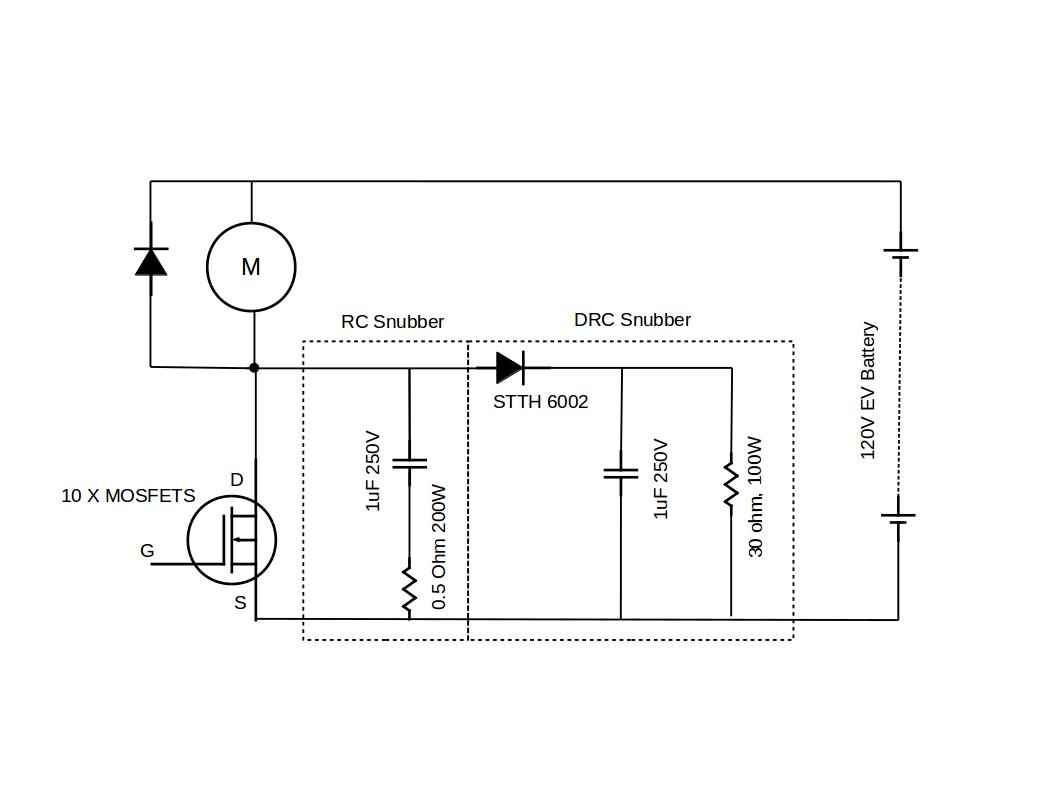 The RC Snubber resistor is a low inductance wire wound resistor, panel mount type with built in heatsink. (Two 1 ohm 100W resistors have been used to make up the 0.5 ohm 200W resistor).

The DRC diode does not need a heatsink. In this case, for the same reason mentioned above, the 1uF capacitor is made up of 4 X 1uF capacitors in series and parallel combinations.

The resistor for the DRC snubber should be as low as possible, but the lower it is, the more power it dissipates. For this solution, 5 X 24V 21W car bulbs in series have been used. An advantage is that the non-linear resistance characteristic of such a resistor provides lower resistance when the PWM is at a low ratio and therefore it will provide better spike suppression at low PWM stages. (High peak currents, higher spike voltages). Alternatively a 100W 30 ohm resistor may be used.